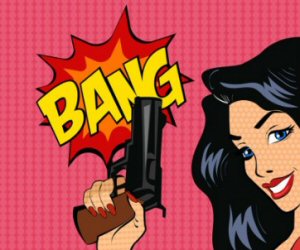 The CIA had an opening for an assassin and after all the background checks, interviews and testing were done, there were just three finalists left: two men and a woman.

For the final test, the CIA agents took the finalists through a large metal door and said they had just one last task.

We must know that you will follow instructions explicitly, no matter what said the leader. They all agreed that they would and they were each sent into another room.

The first man was chosen and told to go into another room where his wife would be waiting and kill her.
I could never kill my wife the man said
The agent said: Then you are not the right man for this job. Take your wife and go home.

The second man was called through and given the same instructions. He was also shocked and declined at first but after some thought he took the gun and went into the room. All was quiet for about five minutes and then the man appeared with tears in his eyes.

I tried, but I can’t kill my wife he said, I love her too much.

The agents said: You’ve failed, you don’t have what it takes, so take your wife and go home!

Finally, it was the woman’s turn. She was called out and given the same instructions… go into that room and kill your husband she was told.

She took the gun and went into the room. There was a moments silence and then shots were heard one after another, bang, bang, bang…

Then screaming was heard. Screaming, crashing, banging, thuds on the walls.

After a few minutes, all was quiet and the door opened slowly and out came the woman, covered in blood and sweat.
The agents looked at her in amazement.   Is everything ok? they said…
That gun was loaded with blanks she said, I had to kill him with the chair!!!