What is sexual orientation? 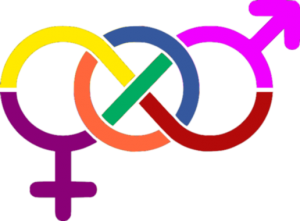 The term ‘straight’ or ‘heterosexual’ refers to people who are attracted to the opposite sex.

As time passes, more and more people are finding themselves not fitting into this natural orientation.

Many terms are used nowadays to account for people who do not fit into the natural sexual orientation.

Lesbian, gay, bisexual, trans, fluid and many other terms have been developed to describe a person’s sexual orientation. A sexual orientation defines our emotional, romantic, or sexual attraction to other people.

Although the term gay is also still often used to describe women who are attracted to other women the term lesbian is most commonly used for this purpose and is considered more appropriate.

If you are attracted to both men and women you are classed as bisexual.

The term LGBTQ is an abbreviation for lesbian, gay, bisexual, transgender, and queer. The letter Q is also used to mean ‘questioning’.

Many people all over the world, regardless of race, class themselves as being of a sexual orientation other than the natural male/female and this figure grows daily.

Both in America and the UK, people aged 16 to 24 years are most likely to identify as LGBQT or another gender.

There are many people that feel that they are not 100% gay, or straight or bisexual and some do not identify with any labels preferring to class themselves as label-less.

There are others who choose to declassify themselves from any form of gender or sexual orientation. These people want a relationship but have no desire for any sexual activity. The term ‘asexual’ is often used to describe these people.

What exactly is gender identity?

Your gender identity is the gender you are given at birth based on your birth circumstance and this determines your sense of being male or female.

Legally, there have only ever been two birth genders; male or female, but with many natural fluctuations and un-balance in genes, these two identities may not accurately correspond to the development of your body or the way in which you feel later on in life.

Some people are born with a gene makeup that do not conform to either male or female gender types. This is when a gender given at birth can cause many problems later in life as it may not have been the most appropriate one.

What does it mean to be transgender?

At birth, most people are told they are either boy or girl based on the genitals they were born with and this is the sex (gender) that you are assigned at birth. For some people, as they grow older, this male or female label may not feel right.

Someone who was born female may feel inside that they are really a male, and someone born male may feel that they should be female. People who feel this way are called transgender.

Others feel that they belong to both genders. People who feel this way often identify as being non binary, gender fluid or gender queer. Some other terms to describe these people include androgynous, agender, gender neutral, and gender nonconforming.

How do people express their gender?

There are many ways in which people can express their gender and these vary greatly. Some people who are transgender decide to change how they dress, some choose to change their name and preferred pronouns. Some may choose to take hormone treatment or have surgical operations to make their bodies more closely match their gender identity. Others do not change anything but simply refer to themselves as the gender. There is no right or wrong way to be a transgender person.

What does being queer mean?

The term ‘queer’ is used to describe a fluid gender identity. In the past, this term was used as a derogatory name for gay men but nowadays, the term queer is used by many people (men and women) to describe themselves or their community but in a positive way.

What does questioning mean?

What exactly determines an orientation?

It’s not known for certain what determines a person’s sexual orientation. Obviously, natural genes determine how you are born but nowadays, many babies are born with a gene mismatch which causes massive problems for the nurses and doctors in determining the gender that will accurately suit that baby as they grow.

Having sex with a particular gender does not determine your sexual orientation. Many people have never had sex with a person of the same sex but still identify as gay or lesbian. This is due to a ‘feeling’ they have inside them which is brought about by their gene makeup – which might not actually be that close to the gender they were assigned at birth.

Cisgender simply refers to the gender identity you were given at birth. A cisgender person is not transgender and cisgender does not indicate biology, gender expression, or sexuality or sexual orientation.

When does a person know their gender identity?

Many people begin to question their gender identity for the first time during puberty but most people have a steady sense of their gender starting very early in life. Many people have felt that their assigned gender was not for them either since they were little or for as long as they can remember.

If you are confused or not sure about your gender identity, seek support by talking with someone you trust such as your doctor or a health care professional. All these services are very professional and discrete!

Have I missed anything? Let me know below.